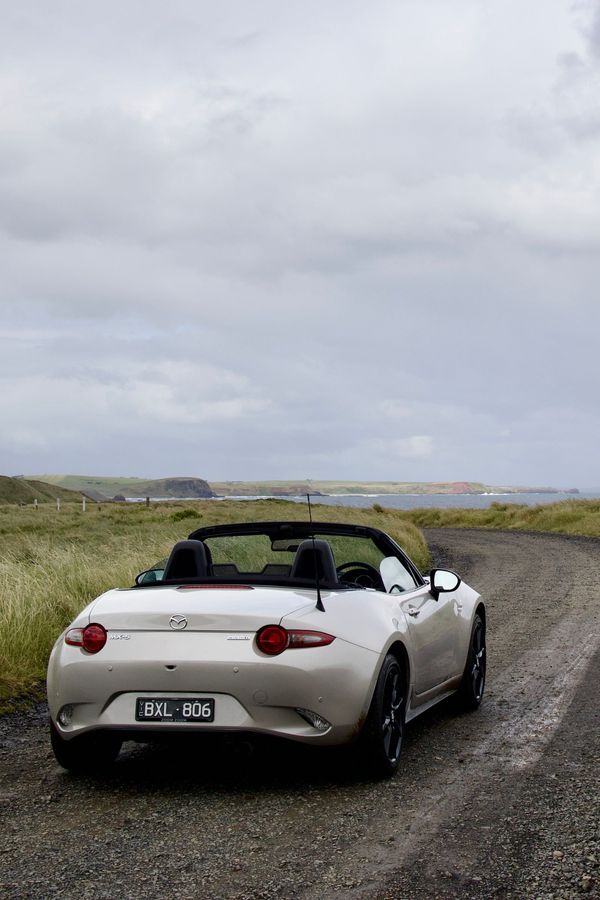 I have no idea where I am going. I picked up Mazda’s premier sports car not half an hour ago and the moment I sat inside all my anxieties and responsibilities simply melted away. Oh, I left the gas on at home? Don’t care. What’s that? Kim Jong Un is nuking my house? Water off a duck’s back. All I want to do is drive. So that is exactly what I’m doing. And it is glorious.

The Mazda MX-5 is not a slow-burn sort of car. It’s an intoxicating hit of excitement injected straight into your bloodstream. The 2.0-litre 4-cylinder naturally aspirated engine buzzes like a hive of mechanical bees and revs to a riveting 7500rpm redline. The steering is beautifully weighted and delivers a reassuring amount of feedback. The suspension is wonderfully compliant. I’m calling it now: this car is perfect.

Turns out the MX-5 isn’t perfect.

The gear stick shakes like a rattle in a caffeinated baby’s hand, the brakes lack bite, and the seats are hopeless (more on that later).

Even if you told me it was assembled by Japanese child slaves, I doubt my love for this car would wane.

But I don’t care. Nothing can detract from how well this car drives. Even if you told me it was assembled by Japanese child slaves or that the interior was upholstered in Rhinoceros’ foreskin, I doubt my love for this car would wane.

My love is waning. I thought it would be a good idea to stretch the MX-5’s legs and take it on a 200km road trip to Phillip Island. This was a mistake. And it’s all because of the MX-5’s seats.

More tactful journalists might say the MX-5’s seats “lack lumbar support.” What they’re actually saying is that the seats are shit (though this may have something to do with the MX-5 not being built for a man of my six-foot-two stature).

After five minutes behind the wheel, I began to feel an ache. After half an hour, I felt as if I had herniated a disc in my lower back. After three hours, I contemplated driving the damn thing into a tree.

And on the fourth day, Noah rested, for his back creaked like a rusty gate and his hair had been torn from its roots.

My ego is in tatters. The MX-5’s manually-operated canvas roof is a superb piece of pragmatic design that is easy to use. At least it is when the car is stationary. It turns out it’s a little harder to operate when accelerating…

I was commuting home from the city in the MX-5. The sun was shining. The roof was down. My arm was resting on the door. In my mind, I was Tom Cruise and I looked good. And then I happened upon a freeway entrance ramp.

At the last minute, I decided to raise the roof so as not to ruin my glorious hair. However, mid-raise the light turned green and I panicked and set off at a brisk pace. Try as I might, I could not overcome the resistance of the air pushing against the raised canvas and latch the bloody roof to its attachment point. And because I had one hand on the wheel and the other was frantically trying to attach the roof, I was unable to change gear, either. So there I was, stuck in first gear making an absolute racket, looking like a buffoon as I failed to fix my roof while my hair flurried around like a bush in a hurricane.

I just had one of the greatest drives of my life. It was raining. The roof was stowed. The stereo was cranked. And I fell in love with the MX-5 all over again. It turns a five-minute drive into an hour and steers with an alacrity that reminds me of an energetic puppy chasing a ball.

Objectively speaking, the MX-5 isn’t quick. From a standstill, it takes around 7 seconds to reach 100km/h. However, because it weighs less than a Russian ballerina and because you’re rowing through the closely-stacked six-speed gearbox quicker than John Oates went through sexual partners, acceleration in the MX-5 feels joyously frenetic. Some may scoff that the MX-5’s engine only musters 135kW and 205Nm. Let them. The MX-5 isn’t for the likes of Billy Bob Junior and his Hellcat-loving ilk. The MX-5 was made for driving. And to this end, the MX-5 delivers in spades.

Moreover, because its 2.0-litre 4-cylinder engine sips fuel like a conservative vicar (6.8L/100km), you don’t have to worry about receiving a shouty email from Greta every time you turn it on. This is guilt-free motoring at its finest. Polar bears love this car. Fact.

It does roll, though. Quite a lot. That said, the upside of having such soft suspension is that the MX-5 is perfectly usable day-to-day. And use it, you should because this car is poetry in motion. At just $37,990, it’s a bargain, too.

Sell the kids and buy an MX-5.

Whatever your question about motoring, the Mazda MX-5 is the answer. What’s the most fun you can have with your clothes on? MX-5. What’s the best-selling sports car of all time? MX-5. What car should I buy for my family of eight? Sell the kids and buy an MX-5.

If money doesn’t make you happy then you’re not spending it right. What you need is a Mazda MX-5. And a new pair of seats.